The chief executive of the National Trust, Dame Fiona, gave an interview to the Times this week (March 2012) regarding what she suggests is a nationwide ‘anxiety’ that is causing children to miss out on play and nature.

Not only does this problem become apparent within the family home but also at school.
I finished school 3 and a half years ago and in the 15 or so years I spent in primary and secondary school I genuinely think I could count the amount of times I was invited to learn outside on literally a few hands-worth of fingers. It’s more than possible that my schools were exceptions rather than rules and if that is the case, then I think schools like mine should be watching schools that revel in the outdoors extra carefully.
For now let’s assume you’ve got home from school (ideally having walked and gulped in as much fresh air as possible on the way). What happens then?
I went to see our good friends over at Aquila Magazine last week and we had a really interesting conversation about the restrictions placed on young children today. The staff there were talking about being able to ride their bike and go for walks with a picnic and wander around for hours generally unsupervised. They were essentially talking about a time when Mrs. National Trust would have been altogether more content with our exposure to the great outdoors. 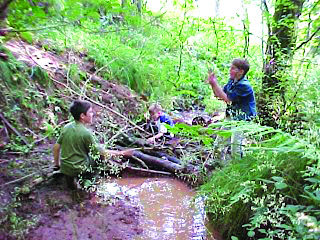 “The world is a different place and we have become very anxious about the risks – real or perceived. […] It’s partly technology and it’s partly a sort of nervousness. The freedom for children to roam unsupervised has shrunk by 90% since the 1970s.”
90%? I hear you ask. Yes, 90%.
Any number of things could decrease by 90% and it would be a crisis, an unmitigated disaster. The world’s population of polar bears, the amount of chocolate produced by Cadbury’s or your height. (Ironically that would be a pretty ‘big’ disaster).
What I’m trying to say is that this drastic reduction in children exploring the outdoors is not okay. I’m not suggesting that everyone open the door, firmly suggest their child exits the house with nought but a couple of slices of bread and cheese and skips off to the nearest wide open space until dinner time, far from it.
As an organisation we pride ourselves on our awareness and supervision of the children that come on a Superweek because the safety and wellbeing of those children is hugely important. However, our second priority, often codenamed ‘having fun’, is also crucial.

“It’s a matter of knowing where the risks are but not trying to wipe them away,”

Sometimes people are in such a rush to engineer out as much risk as they can, to make sure all the boxes are ticked and all the conditions are met, that they accidently engineer out a lot of the fun as well.
If round the clock fun (aside from time dedicated to sleeping to make ready for the next lot of fun) sounds like it might be something your child(ren) would enjoy then explore our website
If you’ve got some great reasons why you think less and less children find themselves outside with a grazed knee and muddy hands, or you think I’m talking rubbish then come and join the debate on Twitter.
James Ferguson
ATE HQ2017-05-27T18:16:16+00:00March 6th, 2012|About ATE|